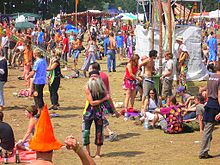 VooV Experience 2005 – one of the longest-existing psytrance openair events

The first hippies who arrived in Goa, India in the mid-1960s were drawn there for many reasons, including the beaches, the low cost of living, the friendly locals, the Indian religious and spiritual practices and the readily available Indian cannabis, which until the mid-1970s was legal.[7] During the 1970s the first Goa DJs were generally playing psychedelic rock bands such as the Grateful Dead, Pink Floyd and The Doors. In 1979 the beginnings of electronic dance music could occasionally be heard in Goa in the form of tracks by artists such as Kraftwerk but it was not until 1983 that DJs Laurent and Fred Disko, closely followed by Goa Gil, began switching the Goa style over to electro-industrial/EBM which was now flooding out of Europe from artists such as Front 242 and Nitzer Ebb as well as Eurobeat.[8][9]

The tracks were remixed, removing the lyrics, looping the melodies and beats and generally manipulating the sounds in all manner of ways before the tracks were finally presented to the dancers as custom Goa-style mixes.[10]

By 1990–91 Goa was no longer under the radar and had become a hot destination for partying. As the scene grew bigger, Goa-style parties spread like a diaspora all over the world from 1993. Parties like Pangaea and Megatripolis in the UK helped spawn a multitude of labels in various countries (U.K. Australia, Japan, Germany) to promote psychedelic electronic music that reflected the ethos of Goa parties, Goa music, and Goa-specific artists, producers, and DJs.[11] Goa Trance as commercial scene began gaining global traction in 1994. The golden age of the first wave of Goa Psy Trance as a generally agreed upon genre was between 1994–97. 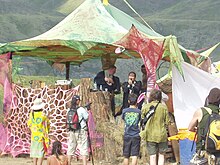 Performance at a Russian psytrance festival, 2008

By 1992 the Goa trance scene had a pulse of its own, though the term ‘Goa trance’ didn’t become the name tag of the genre until around 1994.[12] The Goa trance sound, which by the late 1990s was being used interchangeably with the term psychedelic trance, retained its popularity at outdoor raves and festivals,[citation needed] but also permanent psytrance nightclubs emerged such as Natraj Temple in Munich.[13] New artists were appearing from all over the world and it was in this year that the first Goa trance festivals began, including the Gaia Festival in France and the still-running VuuV festival in Germany.

In 1993 the first 100% Goa trance album was released, Project II Trance, featuring tracks by Man With No Name and Hallucinogen to name two. Goa trance enjoyed its commercial peak between 1996 and 1997 with media attention and some recognised names in the DJ scene joining the movement. This hype did not last long and once the attention had died down so did the music sales, resulting in the failure of record labels, promotion networks and also some artists. This ‘commercial death of Goa trance’ was marked musically by Matsuri Productions in 1997 with the release of the compilation Let it RIP. On the back sleeve of the album at the bottom of the notes, R.I.P : Mother Theresa, Princess Diana, William Burroughs & Goa Trance was written.

While the genre may have been incubated in the goa trance scene it went on to proliferate globally.[14] Its impact was felt in western Europe, Israel, North America, Australia, Japan and South Africa.[14] Psytrance is linked to other music genres such as big beat, electroclash, grime and 2-step.[15] The genre evolved in conjunction with a multimedia psychedelic arts scene.[14]

Psychedelic trance has a distinctive, energetic sound that tends to be faster than other forms of trance or techno music with tempos generally ranging from 135 to 150 BPM but some psytrance songs can also reach 190BPM, 200bpm, 210bpm and even 300bpm. It uses a very distinctive bass beat that pounds constantly throughout the song and overlays the bass with varying rhythms drawn from funk, techno, dance, acid house, eurodance and trance using drums and other instruments. The different leads, rhythms and beats generally change every eight bars.[16] Layering is used to create effect in psychedelic trance, with new musical ideas being added at regular intervals, often every four to eight bars. New layers will continue to be added until a climax is reached, and then the song will break down and start a new rhythmic pattern over the constant bass line. Psychedelic trance tracks tend to be six to ten minutes long.[17]

Dark psychedelic (also dark psytrance or darkpsy or dark-trance ) trance is the heavier end of the psychedelic trance spectrum with tempos around 148 bpm and over. Related styles include psycore (fast and crazy), hi-tech (bouncy and glitchy), and forest (organic and earthy). Characterized by having obscure, deep, and more eschatological background that leads into profound meditation of death, night, and transcendence, often with dismal sounds and heavy basslines. The subgenre often samples horror films in contrast to the science fiction film samples more regularly used in “normal” psytrance. The German artist Xenomorph, Mark Petrick, is considered a pioneer of dark psytrance, with his album Cassandra’s Nightmare released in 1998 being a major influence on the subgenre; X-Dream’s Radio is another 1998 album cited as an early influence.[18]

Full-On trance is a psychedelic trance style that is particularly popular in Israel.[4] This genre has high energy for peak moments, often having melodic, energetic, and crisp basslines with a fast tempo (usually 140-148 bpm). There are some related styles that are derived from this style and are distinguished as different varieties of Full-On: twilight and night full-on (or dark full-on), having bolder and lower notes in their basslines, morning (light and kind of happy), and uplifting.[19]

Prog-psytrance is among the common party themes, normally played during the afternoon or on a different stage. It has grown in popularity since the mid-2010s to the point where it is often also labeled “psytrance”. Artists working in the genre are Astrix and Protonica.

Psybient (short name of psychedelic ambient) is a style of electronic music that contains elements of psychedelic trance, ambient, downtempo, dub, world music, new wave and ethereal wave.[20] Psybient pieces are structured to generate vast soundscapes or a “musical journey”. Like psytrance, it emphasizes on-going rhythm and beatmatching. However, it is more lenient to beat changes than its parent genre, in the interest of generating interesting soundscapes.[20] Psybient is known by other names, including ambient psytrance, ambient goa, psychill, and psydub(psystep/Psy-dubstep).

The origins of this genre is from the trend of goa and psytrance artists ending albums with slower, “chillout” tracks. Shpongle‘s 1998 release, Are You Shpongled? is widely considered to be the key album which popularized this genre, though full-length psybient records had been released before.[21]

Suomisaundi (English: Finnish sound; also known as spugedelic trance or freeform psy) is an innovative variety originating in Finland during the mid-1990s. Popular artists and groups include Luomuhappo including Texas Faggott.

Zenonesque is a style of psytrance which is any psytrance that has characteristics of Zenon Records signature sound. It is often deep, dark ambient sounding with a lower tempo. It can include elements of techno. Relevant artists include Electrypnose, Kromagon, Ivort, Grouch, Tetrameth, and Shadow FX. 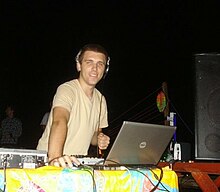 Arronax performing at The Gathering, a psychedelic trance festival, in 2009

Large psytrance festivals are both culturally and musically diverse.[14] They have attracted a following amongst international backpackers. Earthdance, the world’s largest synchronized music and dance festival for peace, has its roots in the psychedelic trance scene.[14]

The Boom Festival in Portugal was originally a psytrance festival but now includes world music. It is held every second year in August and combines social activism with cultural and spiritual elements.[22] In 2004, the Glastonbury Festival dedicated a full day on the Glade stage to psytrance.[23]

In South Africa, a number of recurring long-running psytrance festivals take place such as the Alien Safari, Vortex, and Synergy festivals.[24]

In Australia, there are many long-running psytrance festivals, known as “doofs” such as Rainbow Serpent Festival, Esoteric Festival, New Psycle, and Earthcore (now discontinued).

In 2007 research was conducted on the global psytrance scene. 600 people from 40 countries provided detailed information via an online questionnaire.[25] The results were published as “Beyond Subculture and Post-subculture? The Case of Virtual Psytrance” in the Journal of Youth Studies.[26]