Cannabidiol (CBD) is a phytocannabinoid discovered in 1940. It is one of 113 identified cannabinoids in cannabis plants and accounts for up to 40% of the plant’s extract.[9] As of 2019, clinical research on CBD included studies of anxiety, cognition, movement disorders, and pain, but there is still insufficient high-quality evidence that it is effective for these conditions.[10][11]

Cannabidiol can be taken into the body in multiple ways, including by inhalation of cannabis smoke or vapor, as an aerosol spray into the cheek,[2][3] and by mouth. It may be supplied as CBD oil containing only CBD as the active ingredient (excluding tetrahydrocannabinol [THC] or terpenes), CBD-dominant hemp extract oil, capsules, dried cannabis, or prescription liquid solution.[5][11] CBD does not have the same psychoactivity as THC,[12][13], and may change the effects of THC on the body if both are present.[9][12][14][15] As of 2018, the mechanism of action for its biological effects has not been determined.[12][14]

In the United States, the cannabidiol drug Epidiolex was approved by the Food and Drug Administration in 2018 for the treatment of two epilepsy disorders.[16] Since cannabis is a Schedule I controlled substance in the United States,[17] other CBD formulations remain illegal under federal law to prescribe for medical use or to use as an ingredient in dietary supplements or other foods.[18]

Cannabidiol is the generic name of the drug and its INN.[19]

As of 2019, there was only limited high-quality evidence for cannabidiol having a neurological effect in people,[10][11][20][21] mainly due to the weak design and small number of subjects in randomized controlled trials.[21]

In 2018, cannabidiol was FDA-approved (trade name Epidiolex) for the treatment of two forms of treatment-resistant epilepsy: Dravet syndrome and Lennox-Gastaut syndrome in children with refractory epilepsy.[16][22][23] The recommended daily dose of Epidiolex is 10 mg per kg body weight per day in epileptic children 2–5 years old.[5] While Epidiolex treatment is generally well tolerated, it is associated with minor adverse effects, such as gastrointestinal upset, decreased appetite, sleepiness and lethargy, and poor sleep quality.[16][22][23]

Research on other uses for cannabidiol includes several neurological disorders, but the findings have not been confirmed to establish such uses in clinical practice.[8][10][11][12][24][25][20] In October 2019, the FDA issued an advisory warning that the effects of CBD during pregnancy or breastfeeding are unknown, indicating that the safety, doses, interactions with other drugs or foods, and side effects of CBD are not clinically defined, and may pose a risk to the mother and infant.[26]

Cannabidiol does not appear to have any intoxicating effects (i.e. “getting high”) such as those caused by ∆9-THC in marijuana, but is under preliminary research for its possible anti-anxiety and anti-psychotic effects.[10][11][13] As the legal landscape and understanding about the differences in medical cannabinoids unfolds, experts are working to distinguish “medical marijuana” (with varying degrees of psychotropic effects and deficits in executive function) from “medical CBD therapies”, which would commonly present as having a reduced or non-psychoactive side-effect profile.[11][13][27]

Various strains of “medical marijuana” are found to have a significant variation in the ratios of CBD-to-THC and are known to contain other non-psychotropic cannabinoids.[28] Any psychoactive marijuana, regardless of its CBD content, is derived from the flower (or bud) of the genus Cannabis. As defined by US federal law, non-psychoactive hemp (also commonly termed “industrial hemp“), regardless of its CBD content, is any part of the cannabis plant, whether growing or not, containing a ∆9-tetrahydrocannabinol concentration of no more than 0.3% on a dry-weight basis.[29] Certain standards are required for legal growing, cultivating, and producing the hemp plant. The Colorado Industrial Hemp Program registers growers of industrial hemp and samples crops to verify that the dry-weight THC concentration does not exceed 0.3%.[29]

Research indicates that cannabidiol may reduce adverse effects of THC, particularly those causing intoxication and sedation, but only at high doses.[30] Safety studies of cannabidiol showed it is well tolerated, but may cause tiredness, diarrhea, or changes in appetite as common adverse effects.[31] Epidiolex documentation lists sleepiness, insomnia and poor quality sleep, decreased appetite, diarrhea, and fatigue.[5]

Laboratory evidence indicated that cannabidiol may reduce THC clearance, increasing plasma concentrations which may raise THC availability to receptors and enhance its effect in a dose-dependent manner.[32][33] In vitro, cannabidiol inhibited receptors affecting the activity of voltage-dependent sodium and potassium channels, which may affect neural activity.[34] A small clinical trial reported that CBD partially inhibited the CYP2C-catalyzed hydroxylation of THC to 11-OH-THC.[35] Little is known about potential drug interactions, but CBD mediates a decrease in clobazam metabolism.[36]

Cannabidiol has low affinity for the cannabinoid CB1 and CB2 receptors,[37][38] although it can act as an antagonist of CB1/CB2 agonists despite this low affinity.[38] Cannabidiol may be an antagonist of GPR55, a G protein-coupled receptor and putative cannabinoid receptor that is expressed in the caudate nucleus and putamen in the brain.[39] It also may act as an inverse agonist of GPR3, GPR6, and GPR12.[40] CBD has been shown to act as a serotonin 5-HT1A receptor partial agonist.[41] It is an allosteric modulator of the μ- and δ-opioid receptors as well.[42] The pharmacological effects of CBD may involve PPARγ agonism and intracellular calcium release.[9]

Nabiximols (brand name Sativex), a patented medicine containing cannabidiol and tetrahydrocannabinol in equal proportions, was approved by Health Canada in 2005 to treat central neuropathic pain in multiple sclerosis, and in 2007 for cancer-related pain.[46] In New Zealand, Sativex is “approved for use as an add-on treatment for symptom improvement in people with moderate to severe spasticity due to multiple sclerosis who have not responded adequately to other anti-spasticity medication.”[47]

Epidiolex is an orally administered cannabidiol solution. It was approved in 2018 by the US Food and Drug Administration (FDA) for treatment of two rare forms of childhood epilepsy, Lennox-Gastaut syndrome and Dravet syndrome.[16][18]

At room temperature, cannabidiol is a colorless crystalline solid.[48] In strongly basic media and the presence of air, it is oxidized to a quinone.[49] Under acidic conditions it cyclizes to THC,[50] which also occurs during pyrolysis (smoking).[51] The synthesis of cannabidiol has been accomplished by several research groups.[52][53][54] 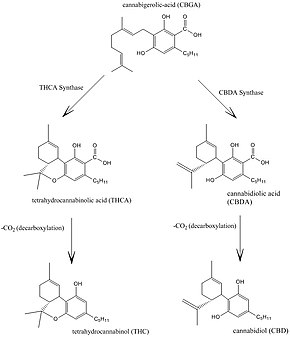 Cannabis produces CBD-carboxylic acid through the same metabolic pathway as THC, until the next to last step, where CBDA synthase performs catalysis instead of THCA synthase.[56]