Alex Grey (29 November 1953) is an American visionary artist, author, teacher, and Vajrayana practitioner. He works in multiple forms including performance art, process art, installation art, sculpture, visionary art, and painting. Grey is a member of the Integral Institute. He is also on the board of advisors for the Center for Cognitive Liberty and Ethics, and is the Chair of Wisdom University’s Sacred Art Department. He and his wife Allyson Grey are the co-founders of The Chapel of Sacred Mirrors (CoSM), a non-profit church supporting Visionary Culture in Wappingers Falls, New York. 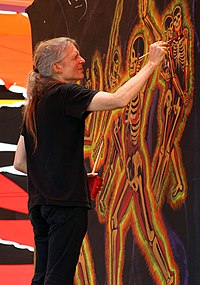 At the Boston Museum School he met his wife, the artist Allyson Rymland Grey.[1] 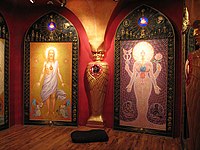 Inside the Chapel of Sacred Mirrors. 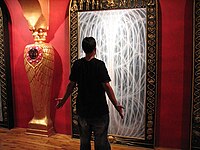 A visitor appreciates a piece of art.

Holland Cotter, art critic for the New York Times wrote in 2002, “Alex Grey’s art, with its New Age symbolism and medical-illustration finesse, might be described as psychedelic realism, a kind of clinical approach to cosmic consciousness. In it, the human figure is rendered transparently with X-ray or CAT-scan eyes, the way Aldous Huxley saw a leaf when he was on mescaline. Every bone, organ and vein is detailed in refulgent color; objects and space are knitted together in dense, decorative linear webs.” [2] Grey’s paintings have been featured in venues as diverse as the album art of Tool, The String Cheese Incident, Meshuggah, the Beastie Boys and Nirvana, Newsweek magazine, the Discovery Channel, Rave flyers and sheets of blotter acid. His work has been exhibited worldwide, including Feature Inc., Tibet House US, Stux Gallery, P.S. 1, The Outsider Art Fair and the New Museum in NYC, the Grand Palais in Paris, the Sao Paulo Biennial in Brazil.[citation needed]

Grey has been a keynote speaker at conferences in Tokyo, Amsterdam, Basel, Barcelona and Manaus. The international psychedelic community has embraced Grey as an important “mapmaker” and spokesman for the visionary realm. In his compendium of psychedelic culture, Psychedelia (2012), Patrick Lundborg speaks of Grey’s position: “First of all, Visionary Art would not be the active, promising field it is today without the appearance of Alex Grey on the scene. Born 1953, Alex Grey is the leading psychedelic artist of today, and also one of the foremost proponents of Visionary Art as a style. Via interviews, his own writings and the CoSM art journal, Grey has contributed to a historical perspective on the school…”[3]

A large installation called Heart Net by Alex and his wife was displayed at Baltimore’s American Visionary Art Museum in 1998-99. A mid-career retrospective of Grey’s works was exhibited at the Museum of Contemporary Art, San Diego in 1999. The Chapel of Sacred Mirrors, CoSM, a long-term exhibition of 50 works of transformative art by Grey opened in the Fall of 2004 in New York City and relocated to its present Hudson Valley location in 2009.[citation needed]

The large format art book, Sacred Mirrors: The Visionary Art of Alex Grey published by Inner Traditions in 1990, is still in print and has been translated into five languages and sold over 150 thousand copies. This book of paintings takes the viewer on a graphic journey through the physical, and spiritual anatomy of the self. From anatomically correct rendering of the body systems, Grey moves to the spiritual/energetic systems with such images as Universal Mind Lattice, envisioning the sacred and esoteric symbolism of the body and the forces that define its living field of energy. Includes essays on the significance of Grey’s work by Ken Wilber, a transpersonal psychologist, and by the noted New York art critic, Carlo McCormick. Grey’s philosophical text, The Mission of Art, published by Shambhala in 1998, traces the evolution of human consciousness through art history, explores the role of an artist’s intention and conscience, and reflects on the creative process as a spiritual path.[citation needed]

Transfigurations is Alex’s second large-format monograph from Inner Traditions, containing over 300 color and black and white images of his work. Transfigurations explores Grey’s well known portrayals of light bodies, performance works, relationship with his wife, Allyson Grey, and their quest to build a Chapel of Sacred Mirrors. Sounds True has released The Visionary Artist, a CD of Grey’s reflections on art as a spiritual practice. Grey co-edited the book, Zig Zag Zen: Buddhism and Psychedelics (Chronicle Books, 2002, reprinted by Synergetic Press, 2015).[citation needed]

In 2004 Grey published his collected works in Visions, a limited-edition boxed set which contains a portfolio of new works along with his Sacred Mirrors and Transfigurations. Net of Being, released by Inner Traditions in 2012, explores how Alex Grey’s visionary art is evolving the cultural body through icons of interconnectedness and a new symbology of the Networked Self. Net of Being contains spectacular photos of Grey’s collaboration with the band Tool plus his worldwide live-painting performances, and offers Grey’s reflections on how art evolves consciousness.[citation needed]

In ARTmind (2004) Grey explores the healing potential of sacred art. CoSM the movie, was released in 2006 and features Grey giving a tour of the Chapel of Sacred Mirrors exhibition on display (2004-2009) in New York City. Grey appeared in the 2006 film Entheogen: Awakening the Divine Within, a documentary about rediscovering an enchanted cosmos in the modern world.[5] He also appeared in the film DMT: The Spirit Molecule, in which he talked about the importance of the substance DMT in the past and present world, as well as describing some of his personal experiences with the substance and how it influenced his painting.[third-party source needed] 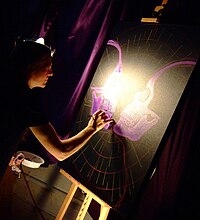 Grey’s paintings are a blend of sacred, visionary art and postmodern art. He is best known for his paintings of glowing anatomical human bodies, images that “x-ray” the multiple layers of reality. His art is a complex integration of body, mind, and spirit. The Sacred Mirrors, a life-sized series of 21 paintings, took 10 years to complete, and examines in detail the physical and metaphysical anatomy of the individual. “The inner body is meticulously rendered – not just anatomically precise but crystalline in its clarity”.[6] Many of his paintings include detailed representations of the skeleton, nervous system, cardiovascular system, and lymphatic system. Grey applies this multidimensional perspective to paint the universal human experience. His figures are shown in positions such as praying, meditating, kissing, copulating, pregnancy, birth, and death.

Grey’s work incorporates many religious symbols, including auras, chakras, and icons with geometric shapes and tessellations in natural, industrial, and multicultural situations. Grey’s paintings are permeated with an intense and subtle light. “It is the light that is sublime in Grey’s oeuvre – which is the most important innovation in religious light since the Baroque – and that makes the mundane beings in them seem sublime, in every realistic detail of their exquisite being”.[6] His highly detailed paintings are spiritual and scientific in equal measure, revealing his psychedelic, spiritual and super-natural view of the human species.[7]

Grey has also made his own contribution to the philosophy of art in his book The Mission of Art (1998). Therein, he promotes the possibility of the mystical potential of art: he argues that the process of artistic creation can (and should) play a role in the enlightenment of the artist. For him, the process of artistic creation holds the potential of transcending the limitations of the mind and more fully expressing the divine spirit. He also believes that art can induce within the viewer an elevated state wherein spiritual states of being are attained.[citation needed]

In an interview with Ken Wilber for Integral Naked, Grey described an experience of shared visionary mystical experience between himself and his wife, which led him to believe in spirituality and spiritual practice.[citation needed]

Grey’s artwork has often been used by music groups on their album covers.

The Discovery Channel included Grey in a feature on art and creativity in altered states.

The Viking Youth Power Hour interviewed Alex and Allyson Grey about the role of sacred art, the holy shenanigans of Burning Man, and the development of his process.

Grey’s work and his Chapel of Sacred Mirrors gallery in New York City are featured in a 2006 DVD release CoSM The Movie, directed by Nick Krasnic.

Grey talks about his personal philosophy in the 2009 film Cognition Factor.[8]

In Variable Star, a 2006 science fiction novel written by Spider Robinson based on a story outline by Robert A. Heinlein, Robinson devotes several pages to his protagonist’s discovery of Grey’s Sacred Mirrors and Progress of the Soul series, and to using them to enhance meditation.[9] 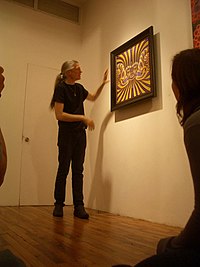