We found this inspirational 3 tips on Marambas Facebook page. Maramba is a Hitech Psychedelic Trance producer from Brazil. Head over to his Facebook page for more info

1. Don’t limit yourself by saying “what I want to do is the usual Hitech, Progressive, Forest or whatever”. If you like these styles, ok, but first do what you have inside you and remain loyal to that essence. If it fits in Dark or Hitech or whatever style, good. If it doesn’t, don’t mind, keep doing your own thing no matter what people say (this is how many genres popped up in the first place, including psytrance itself).

2. Some people don’t like new things, for many reasons that I won’t mention here, but they usually are longing saying “their time was better etc”. Trust me when I say: pay NO attention to this! They have the best intentions, I know they do, but don’t let them demotivate you or make you feel less capable of achieving something. Do what you love and keep in mind tip number 1 always. I say this because when I started making fast music many years ago almost everyone said it was a dead end, no one would like it, only a few artists make fast music because it doesn’t work, etc… I’m happy that I didn’t listen to them because 12 or 13 years later (today), I play more often than the people who criticized me over a decade ago and even progressive artists are now making 200 Bpm tracks! So trust me when I say “trust your heart, remain loyal to your essence, stay the course and keep focus”…

3. Last but not least, maybe the most important: don’t ever let anyone make you think you don’t deserve or that you don’t have the capacity to get what you want. You can and you will! Go for it! 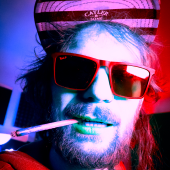 A trip to Magical Nepal – A Travel report by PARANDROID

Psytrance 2018: New Track by HUMANINSTINCT – Place in your head